Skip to content
Previous Next
Building Your Own Hydroponics System

Tips on Starting Your Own Hydroponics System

It is evident that the indoor gardening space has no shortage of innovations in cultivation technology. However, there is always room for the “do-it-yourself” hydro cultivator regarding grow room design. Yet, for many growers, the ease and simplicity of purchasing a pre-fab hydroponics grow system makes perfect sense. These horticulturists, who are more interested in horticulture than garden design, find comfort in the fact that hydroponics equipment companies supply abundant troubleshooting information, as well as spare parts, for their systems. Nonetheless, pre-built hydroponics systems are quite expensive. Basic NFT (nutrient film technique) setups retailing, at the low end, for around $700. This cost does not include other infrastructural necessities such as horticultural lighting and environmental controls. Moreover, more technically inclined growers prefer the challenge of creating their own hydroponics setups. Because, as many indoor growers and greenhouse cultivators are notorious “tinkerers” by trade.

For the industrious cultivator, it is possible to design a hydropon 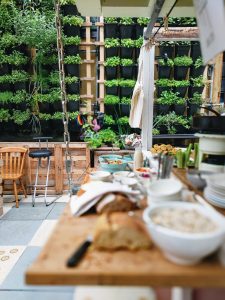 ics system that is highly-functional, while simultaneously not “breaking the bank.” That being said, for these do-it-yourself growers, all that is required to build a hydro grow system is a logical set of plans, some gumption, and easy access to a garden supply store. To illustrate some basic concepts on hydroponics system design, Maximum Yield broke down they key points of popular hydro methods as a starting point: NFT and Ebb and Flow. We have also included some easy-to-understand advice on designing these systems yourself. After taking a look at this brief survey of homemade hydroponics systems, you can decide which may be the best for your home gardening needs.

NFT is one of the most popular hydroponics system designs used for indoor gardening today. It’s versatility makes it extremely applicable in commercial settings with vertical farming and greenhouse production. For those who did not know, NFT cultivation is characterized by plants situated single-file, in rectangular shaped “canals.” These are often made of a PVC-like material. Commercial operations often favor NFT because the thin shaped canals make the system easy to scale. The single-file rows can be strategically placed to utilize every square foot of available light. In an operational sense, NFT systems pump nutrient rich water out of a reservoir and through the canals which house grow mediums, or nets, as well as plants. The defining characteristic of NFT hydroponics is a constant, recirculating source of water that is continuously moving past, and in contact with, the root systems of plants. While moving through the system, all the while not totally submerging the roots. In essence, this moving nutrient water leaves a “film” on the root system, giving NFT its name.

If you are interested in designing your own NFT system, it is important to note that these setups have a good amount of moving parts. Similarly, all parts must work in unison to achieve ideal garden conditions. Either way, most of the required parts can be procured at hardware stores and gardens supply stores. The primary elements of an NFT hydroponics system are: reservoir, air pump, tubing, air stone, water pump, timer, canal, and grow medium. 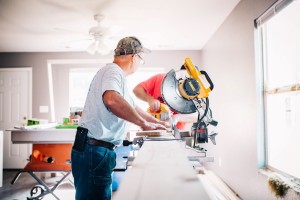 As previously mentioned, PVC-like canals are the defining characteristic of NFT hydro systems. As such, hobbyist growers can utilize PVC in the construction their gardens. For starters, you will cut holes into the PVC that snugly fit your chosen cultivation medium – ideally stone wool or nets – which houses the plants. These PVC canals are then mounted on a wood frame which positions them a few feet off the ground, and at a slight angle. After that, place a rectangular shaped reservoir (that mirrors the garden size) underneath the PVC / wood frame. The water pump will pump the nutrient rich water solution through the irrigation system and through the rootzone of the plants. This water will then filter back to the reservoir by the angled PVC and gravity. While the water can directly drain from the PVC into the reservoir in a sort of “waterfall,” many prefer to rig a hose that uses gravity to feed it back to the holding tank. Finally, the air pump and air stone are used to aerate the recirculating reservoir water.

Ebb and flow hydroponics systems are defined by the large, rectangular “hydro tables” seen in many hobbyist indoor grows. For small-scale, home-based growing, these systems are a safe bet, as they have relatively less parts than seen with NFT. To illustrate, ebb and flow systems house all the plants on a single table (or several tables) in a grid formation. Each plant essentially shares the water and

garden space. Furthermore, this method is characterized by the periodic “flooding” of the hydro table in which grow mediums and plants rest. Ebb and flow hydroponics is set apart from NFT by the fact that with this process, the grow medium and plant roots are almost entirely submerged in nutrient water in static “flooding” cycles. This method is unlike the continuous “film” flow seen with NFT. For purposes here, we will be looking into recirculating ebb and flow systems.

To design an ebb and flow system of your own, many of the NFT system principles are still at play. However, there is a larger emphases on things like efficient timing and accurate flooding. With this notion in mind, the constituent parts of an ebb and flow system generally mirror those of an NFT hydroponics system. However, in ebb and flow, a hydro table replaces  the canals: reservoir, air pump, tubing, air stone, water pump, timer, table, and grow medium.

The most basic, as well as affordable, infrastructure for a do-it-yourself ebb and flow garden begins with two symmetrical plastic containers, with one being a good deal “deeper” than the other. The crux of the setup is that the deeper container will act as the reservoir while simultaneously supporting the “upper” shallow container which houses the grow medium and plants. Using a drill, two holes should be drilled into the bottom of the shallow container. One of these containers will receive nutrient rich water and one will expel it. 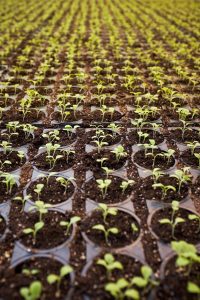 Moving forward, you will connect the water pump to a plastic hose that penetrates the water entry portal to fill the shallow grow container. This will be your intake irrigation hose. Next, another plastic hose will be set to penetrate the bottom of the shallow container as the water outtake portal. This water expulsion tube should be lined with a screen and penetrate about two inches into the grow medium off the base of the flood container. This tube will act as an overflow when irrigation water gets to the ideal point. Interestingly, when the pump and water shutoff, excess water is sucked back into the main holding reservoir with a siphoning effect. This action allows the grow medium and root zone dry out. The water outtake system should ensure that medium is adequately drained after each flood, otherwise there will be a plethora of issues with over-watering.

Timing is essential with ebb and flow system, and an accurate timer must be implemented to allow for precision in flooding. Because, plants like their root systems to at least partially dry out between irrigation intervals. This rhythm can only be achieved with trial and error. A watchful eye will be helpful in getting your ebb and flow setup “off the ground.”

Homemade hydroponics systems are not only affordable, they can be quite educational. As many experienced horticulturists know, the only way to truly “master” a grow technique is to understand every facet of said system. As such, while do-it-yourself hydro systems are likely not dependable enough to employ on a commercial scale, they can be extremely helpful for the novice grower interested in understanding the ins-and-outs of hydroponics. Whether it be with NFT or ebb and flow, building your own hydroponics system is a fun and practical way to begin amassing a knowledge base on indoor gardening techniques.

This article originally appeared in the June / July 2018 edition of Maximum Yield Magazine.